July has started in the mean while and I have been back in Belgium for about two weeks. Since last friday I finally have, after a visit to the BCAA, my authorization for the Airbus A320 on my license!

Since the last post I have made a giant leap in my training. To start with our skilltest in the simulator. After a free weekend between the loftsession and the skilltest both Ivo and me were as ready as we could be for our test. The start wasn't really what we expected though... Normally you have about an hour of briefing before the simulatorsession starts to prepare and to receive information about this session. This information includes date like airports, weather, performance, flightplan,... You need these to prepare, to make the necessary calculations and to review the charts you will need before entering the simulator.

But eventually our examiner only showed up about 15 minutes before we were supposed to enter the simulator. This after about an hour and a half of stressing for both Ivo and me because we didn't had any information about him except his name. And at 5h in the morning there is nobody pressent that could give us that information. But in the end it was all ok since we received all the necessary calculations from him and we could choose the airport we would use for the session.

We were supposed to fly each about 2h and to act as commander for the time the other one was flying. In these two hours we did the mandatory exercises like an normal flight with some small failures, an engine failure, one-engine go around, evacuation after landing and some other small items. The examiner needed to see if we were able to act as a crew and to safely control the aircraft in both normal as non-normal situations.

During the normal preparation preceding the take-off he tried to trick us by changing some small items we were supposed to check during this preparation.  But after a few thing he saw we always checked these items and that he couldn't trick us on this stuff.

After about four hours both Ivo and me had proven ourself and we succeeded the skilltest. As a finishing touch we had another failure as instruction, a gear collapse during take-off. This is the plane going through one of his main gears and going of the runway because of it. One engine remained running because the other one was destroyed by hitting the ground. The simulation isn't perfect but it was still impressive and educating to experience it.

Three days after our skilltest we had our basetraining, the most fun part of our training in Spain. This was because we would fly six patterns each in a real Airbus at Reus near Barcelona. To do this we would first had to get from Madrid to Barcelona. With three guys and a car stuffed with suitcases and airbusbags we reached Barcelona in about four hours. We spend a day on the beach and another one strolling through the city. We could finally relax and live up to our basetraining on thursday.


Thursday morning it was finally there, the real deal! After some searching and asking around we found the meetingpoint were we would meet with the others and the captain from Vueling which would be flying with us. After picking up the necessary paperwork and passing through customs we took a van to our aircraft: EC-ICQ. This would be our victim of the day, an Airbus A320 of Vueling. One of the oldest ones of the flees but therefore not les fun or safe to fly!


After the briefing in the aircraft and a walkaround to check some mandatory items before the flight we were ready to go! I reserved myself a spot on the jumpseat for the trip to Reus of which a safetypilot would fly the first leg. This second pilot was mandatory and he had to complete some items to revalidate his license as safetypilot. One of these items was a simulated engine failure after take-off. Once we were above the sea the captain closed one of the throttles to simulate this. After the mandatory procedures he regained both engines towards Reus. Once there he was also supposed to do a one-engine go around. So again one engine on idle and on final we did a go around on only one engine instead of landing. After this go around it was up to us!

I was a bit surprised by the speed at which I ended up in that right seat. Normally Ivo should fly first but because I was in the jumpseat and already there it was up to me to perform my six patterns. I didn't even had time to remove my fluo jacket. But once in that seat and you feel immediately at home. After a short briefing from the captain you are already at the end of downwind before you even realise it.

The first time it was still adjusting to the handling of the aircraft because it remains different from the simulator. But after the second and third pattern it is just like flying the Piper in the pattern at Falcon Field, just a bit bigger and more sluggish and you have a nice sidestick!

The first landing and especially the first time you put TOGA (full thrust), it gives such a nice feeling you know immediately this is the stuff you want to do for the rest of your life! Because the plane was empty aside from the two pilots and our group of six, the plane flew like a rocket! It passed way too fast though.

Before you know it the last circuit is coming up but when your captain asks if you want to perform a short circuit, you know you will end in style! A short circuit means that you will start turning in earlier when you are parallel with the runway and you also need to descent faster to be aligned with the runway in one big move. You have to descent faster and you need to turn sharper to make sure not to overshoot the runway axis. During this time you fly visually and if you intercept the runway axis perfectly and the safetypilot behind you yells "NICE!", you know you had a beautiful end of it all.

After taking off again directly after my last landing the captain takes over and it is over...time for the next one! It was over way to soon and you still had to spend 5h in an empty Airbus to allow the other to perform their patterns. But it is nice to spend some time in an empty aircraft and to see and do some stuff you would never be able to do in a full aircraft.

After everybody finished we flew back to Barcelona and it was finished. Still some paperwork to do and we could go. We remained one more night in our hotel to leave on friday evening for home. Yannick would take the plane and Ivo and me would cruise back home by car. A quick stop at the viaduct of Milau and a stop at the first belgian gasstation for a Jupiler were the only thing worth mentioning for that trip, the only ones I want to share that is.

In the mean while I got my license, I made some appointments before I leave and I am looking forward to my goodbye party next Saturday. The next blog will probably be from Kuala Lumpur! 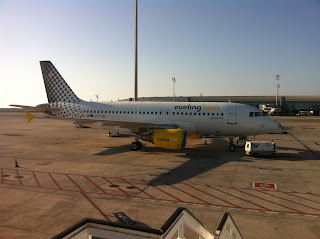 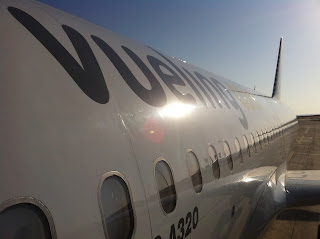 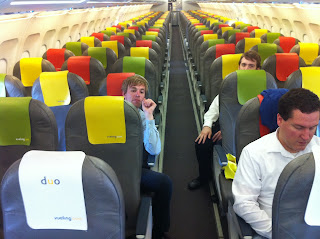 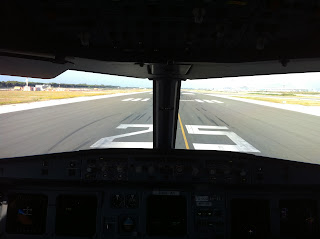 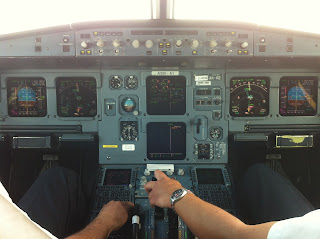 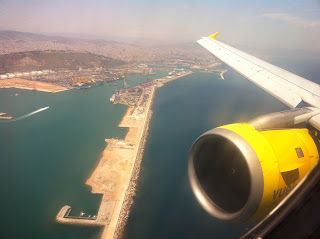 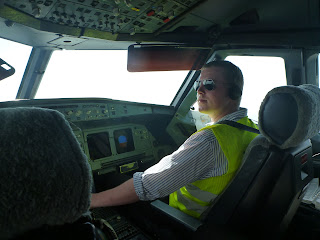 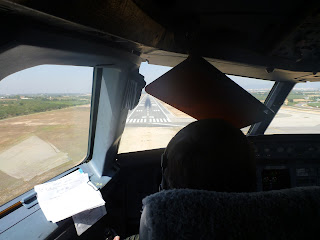 Posted by baetjes at 1:29 PM No comments:

Posted by baetjes at 1:26 PM No comments: